Valgrind is a very useful tool that allows you to spot memory leaks, memory corruptions and other bugs in your program which would have otherwise been difficult to find and track down. Here is an example error Valgrind can generate:

This is Valgrind-speak for “you wrote a char in a location which was not allocated. This happened in the get_pathname function on line 33”. In this example the program still functioned. However, this has the possibility of crashing your program if you are lucky, and overwriting memory some other code uses (thus creating unexplainable behavior) if you are unlucky. If you are interested, read on! This tutorial will show you how to install Valgrind.

Unfortunately, Valgrind doesn’t work in Mojave. You can currently install a work in progress version which improves support but there will be a lot of false-positive errors to ignore.

Instead, I like to run Valgrind on Linux. The Linux support of Valgrind is excellent. This does require you to add support for Linux to your application. Luckily that doesn’t take too time, you mostly need to change a few includes (#ifdef __linux__ is your friend) and fix a few issues that gcc finds but clang doesn’t.

How to install Docker

Non-Codam students can skip a bit.

Open up the Managed Software Center and install Docker from there. We do need to make a few changes before you launch it.

Docker will download a lot of Linux parts and unless you have almost nothing in your home folder it will exceed the 5GB limit. Instead, we will store Docker in goinfre. goinfre is a folder that is specific to the current iMac. It does not have artificial limits and is perfect to store Docker in. Because of the nature of Docker, it doesn’t matter that this folder isn’t synced between iMacs. Docker will transparently download everything it needs when running it on a new iMac.

Note: goinfre and sgoinfre are different and unrelated folders. sgoinfre is a Network File Share allowing students to store larger files at a slower speed. goinfre is a folder stored on the local iMac and it not synced. The reason we are using goinfre instead of sgoinfre is that Docker requires locks, which sgoinfre does not provide.

Now, we can launch Docker. A Docker indicator will be visible in the top right. Open the menu and wait for a green dot with the text “Docker is running”. 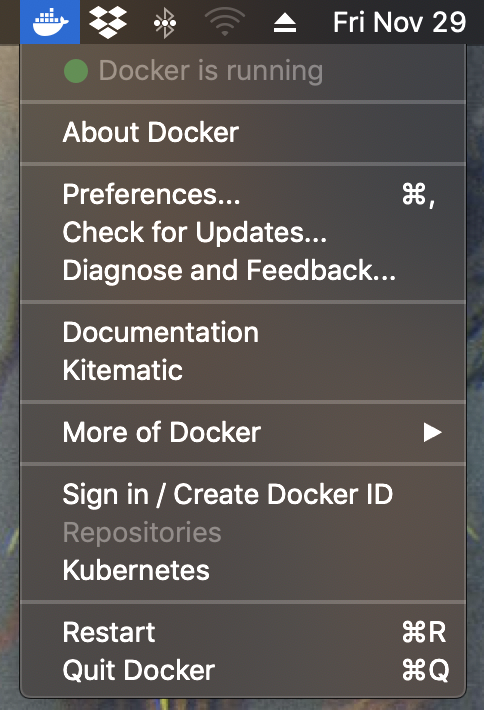 Open a terminal and type docker ps. If you get the following output you did it correctly:

Let’s test it out, run the following command to get a Debian Linux shell:

Here I asked Docker to run bash in debian. We want it to be interactive -i so bash doesn’t immediately quit because there is no input. And we want a pty -t so that bash shows us a prompt. We also want to delete the container on exit --rm so it doesn’t waste space

Since Debian wasn’t already downloaded, Docker will download it for us. If we execute it again debian won’t be re-downloaded.

The automatic redownloading is why it makes perfect sense to store Docker in goinfre. Think of ~/goinfre/docker more like a cache then something you need to take care of.

Accessing our project within Docker.

docker-run(1) has a nice -v option, which allows us to mount a specific folder from the host to the Docker container. Let’s try to open a folder in Docker. I store my ft_ls in ~/archive/42/ft_ls. To get access to that folder within Docker I would run the following command:

However, if we try to make our project, it won’t work:

To save space, the debian Docker container is very minimal. Anything extra can be installed manually using apt-get. You don’t want to reinstall the required program every time you open a container, so instead, I created an image with the required package pre-installed. The image is called nloomans/codam and has gcc, clang, make, valgrind, and criterion preinstalled.

Let’s try it out: (this will take a while to download!)

And Valgrind works! Here is how it looks if Valgrind finds an error:

Hint: Got an error like file not recognized: file format not recognized or cannot execute binary file: Exec format error? That means you are trying to use macOS object files/binaries on Linux. Running make re should help resolve that.

Hint: Is valgrind not giving you line numbers? Try recompiling with -g. If you followed my Makefile tutorial make "CFLAGS=-Wall -Wextra -Werror -g" should do it.

Hint: Don’t know what an error means? Paste the first line into your favorite search engine!

Instead of typing docker run -it --rm -v ~/archive/42/ft_ls:/ft_ls nloomans/codam, again and again, I like to use the following alias I wrote:

This will allow me to run docker-pwd anywhere, and it will create a new Docker container, mount my current working directory in it, and cd to the correct location in the Docker container for me. (Yes I’m lazy)

Hint: Try to integrate valgrind in your workflow. Regularly run your code trough Valgrind instead of waiting for errors to become visible first. This way one notices errors quicker, making them easier to fix.